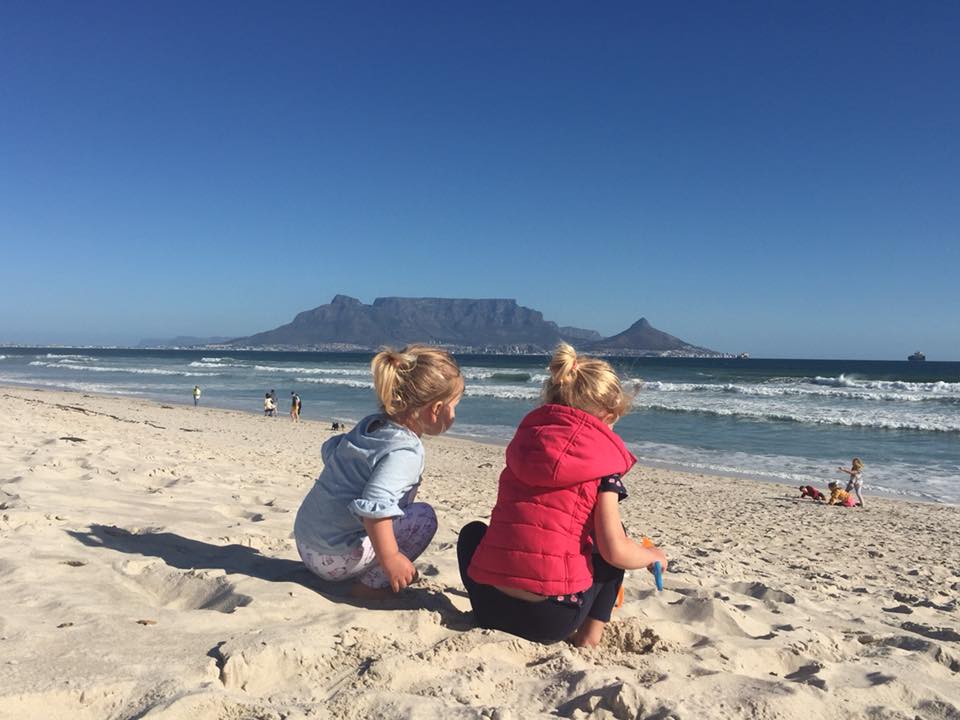 As it turns out real super heroes don’t wear capes. They wear size 6 pull up nappies and size 7 bright orange sandals.  They are also called Issy and Emilie and they just so happen to be our daughters which is pretty cool!

Our friends and family back in the U.K. persistently said to us that this would be the right time of our young children’s lives to make this move and that their resilience and adaptability to the situation would see them not only get through it but come out of the other side as more rounded individuals.

Good old lip service I thought. Read that in the papers did you? Some Dad write a blog on it did he? Pah!

They may not fully understand the move, I pondered but the change of environment would surely throw them into a free fall of emotion that we would struggle to manage day in and day out.

Well I have been proven completely wrong. I am sure every parent thinks that their children are amazing but I think mine deserve medals and MBE’s.  Do they do those over here? I’ll check on GumTree as that seems to be everyone’s answer to solving problems in South Africa!

Sorry, I digress. It’s been nearly 6 weeks since 99% of our belongings and the childrens’ toys were packed into a huge block of metal and sent to sea. There is so many of those belongings I am missing right now so imagine how four year old Issy feels about her favourite night light that Grandma bought her, her play kitchen and all of her arts and crafts that are still not in the house yet?

Emilie, at the age of two obviously doesn’t see things the same as that but routine is everything for our kids and going from the warmth of their lantern lights, their own beds and mattresses and choice of 100 story books to sleeping on mattresses in our room with a choice of three books and a bright bed side light that we need to turn towards a wall to dim is like going from a fine Sauvignon Blanc to Lambrini or an Aston Martin to a Robin Reliant.

During this period they have also started a new school which is chalk and cheese to what they were used to in the U.K. We dropped them off at 7:30 and collected them at 18:45 from our stunning childminder Neli over in Blighty. The girls loved her to pieces and she loved them.  It was extremely emotional when we left Neli’s for the last time and we all miss her dearly.  Issy talks about her almost daily and says she misses her friends there.  There were days when Issy would cry leaving Neli’s house in the evening as she wanted to stay on whereas most youngsters cry when they are dropped off.  Issy and Emilie were definitely the favourites there and that’s not just me being bias.

They also never have been separated. Separation anxiety was always going to be a problem with them leaving us in the first instance and then each other into differing classrooms and children speaking Afrikaans to them as well.  We had spent every waking and (very broken) sleeping minute with the girls for nearly 25 days in a row.  We were their constant and their virtual comfort blankets.

For the first week we were picking them up a bit earlier and when we arrived Issy would be in Emilie’s class towering over the other children but joining in with their activities all the same.  She said she kept going in there to check that Emilie was ok and if her little sister was crying she could show teachers how they should calm her down and where the sanctuary of her dummy was.  What an amazing big sister she is.

That side of our adventure has been the rockiest to date and although they are only doing 08:00 until 12:30 they are struggling to settle in to a rhythm that will allow Mikaela and I to do what we need to do to set up the happiest of homes. Only just before this long weekend here have they finally stayed at school the whole 4 and a half hours on consecutive days.

Watching your children upset and homesick is heartbreaking and can really a place a huge seed of doubt in one’s mind but this is a proper school and not beautiful Neli’s house they are in now. The change in environment alone is enough to make any young child wobble with confusion.

Each day at school is getting easier for them and us though and slowly but surely they are picking up friends and Emilie especially is starting to thrive in the environment so onwards and upwards.

One piece of advice that I would share with anyone thinking of undertaking this sort of adventure is pick a location where the sun shines. The girls are thriving in the outdoors lifestyle better than I ever could have imagined.

In London we used to get so frustrated by how hard it was to entertain our children day to day without spending the national debt of a small country. We didn’t have a garden so obviously that was never in our favour but the little monsters were amazing at emptying their toy room into the living room and then just leaving it there.  Then the whole house was suddenly under attack with mess everywhere.  We’d end up getting so claustrophobic that we would just have to get them out of the house.  In the summer we had the river that we could walk down to the play parks on dry days but in the winter the price of heaving soft plays and soaking wet petting farms started to add up.

Here we have the garden and the stunning weather. Mikaela and I were gardening last night whilst Issy and Emilie, armed with their new gardening kit of their own were happily digging and weeding their own cabbage patch of a garden at the same time.  They were loving every muddy second of it and when they got bored of that then they were straight onto their new trampoline.  The same trampoline that is being jumped on at 6:30 in the morning and at 18:30 at night.

In short, it’s so much easier to entertain outside than inside whilst actually giving yourself that bit of time to do what you want to do as well.

Even when you are inside there are areas for them too. Most restaurants have an indoor soft play that is actually supervised by a qualified child minder! It’s heaven.  On occasion, Mikaela and I have actually finished our cappuccino’s whilst they are still hot.  That’s rather alien to me I must say.

I just don’t think with the over protective way that Health & Safety and safeguarding is within the U.K. the idea of these extremely hands on supervisors would take off but with a small amount of trust and a generous tip afterwards they are worth every Rand. All of a sudden our national debt is driving us to becoming Lactose Intolerant with the amount of milky coffees we drink rather than penniless with hot, sweaty and overtired soft players in the back seat of our car.

My favourite part of having the children in South Africa so far though is the vast amount of open space. Every wine farm has a massive Jungle Gym or play area but for me it is the beach that warms me the most both inside and out.

I’ve tried to explain this to people before but there is something that simply smiles inside of me when I see those two beautiful bundles of happiness running along the beach with the waves in the background. I think it is just the sheer innocent freedom of it all. It’s the ultimate ‘let kids be kids’ attitude.  Life gets tougher with each passing year so whilst they don’t have to worry and think about the things that we adults do then let their biggest worry be where their next ice cream is going to come from or whether or not they can jump higher than yesterday on the trampoline.

The constant of being outside has also opened up friendships for the little ladies. There is a girl, Sofie, 3 doors down that although 5 years Issy’s elder has taken a real shine to her.  They have formed a lovely relationship and the best thing is that Sofie and Issy never leave little Emilie behind.  They take her everywhere and although we have literally no toys here; we managed to fit a few bits and bobs in our suitcases, they have spent an equal amount of time at each other’s houses.

Without going too far off the point I am trying to make here, I was chatting to Ollie, the young ladies’ Dad last night and he was saying that at the age of 9 she has no idea what television really is. She watches DVD’s on theirs but has never been caught up with the fads and commercial side like we have in the U.K.

This clicked with me why she quite liked coming to our house so much. Issy as an ironically large collection of Shopkins toys.  I say ironically because the toys are so small and easy to lose but what they do is really open the imagination and encourage story telling.

Sofie, Issy and Emilie one day a couple of weeks back sat on an extremely barren floor in our house and started creating stories, characters and miniature houses for them to live in. They were using their minds and imagination to entertain themselves rather than watching Peppa Pig jump in muddy puddles or kids opening chocolate eggs with toys in for hours on end.

It really resonated with me and when our container, with television on board, arrives then I think our attitude towards the use of that television may well be reviewed. Let’s actually jump on the trampoline rather than watch the pig do the same in the puddles.

I may be starting to sound rather sycophantic towards the children like they have been complete angels but believe me they haven’t. They are allowed to be bored at times and get restless but seriously, 24/7 entertaining is hard going and taxing work.  It is not for the feint hearted purely for the reasons I have documented above and there have been moments when screaming is your only next ploy but fortunately you find the strength to walk away instead.

Issy especially knows how to push every button under the sun to aggravate even the smallest nerve in your body and any adult only time Mikaela and I have to actually chat is preceded by cooking dinner, packing lunch boxes for the next day and picking up the beads and marbles the girls managed to miss when they were packing away.

Until the routines of work, school drop offs & pickups and any potential socialising have settled into any sort of rhythm we know it’s not necessarily going to get any easier but in ‘Captain’ Issy and her trusty sidekick ‘Super Pull Up Pants’ Emilie we have two girls that are an example to us of how to stay resolute, keep smiling and battle any challenge that is thrown at us in the coming months.

You may or may not believe me but hey I am just some Dad that wrote it in a blog that you have now read.

View all posts by Andrew Daniel

5 thoughts on “The Resilience of our Cape Crusaders”